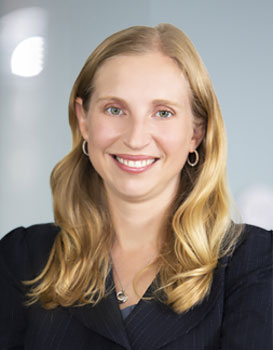 Ellen has represented hundreds of wildfire clients and assisted in recovering millions of dollars in settlements for wildfire victims. Ellen has tried seven cases to verdict, argued before the California Court of Appeal, and taken and defended numerous depositions in product liability and commercial litigation matters.

Ellen also has regulatory law experience from her employment as a Senior Counsel at San Diego Gas & Electric, practicing before the California Public Utilities Commission (CPUC). She represented San Diego Gas & Electric in evidentiary hearings in December 2017, where she was lead counsel in an application requesting several hundred million dollars for a new Customer Information System. Ellen presented and defended the company’s witnesses and cross-examined the intervenor witnesses from the Office of Ratepayer Advocates and The Utility Reform Network.

Ms. Adler clerked for the Honorable Michael Daly Hawkins on the Ninth Circuit Court of Appeals. Ms. Adler graduated Order of the Coif in 2004 from Stanford Law School, where she served as an articles editor on the Law Review. She was awarded the Hilmer Oehlmann, Jr. writing award for best moot court brief in her first-year section.